From the archives: Eunice Overend’s account of the 1942 air raids 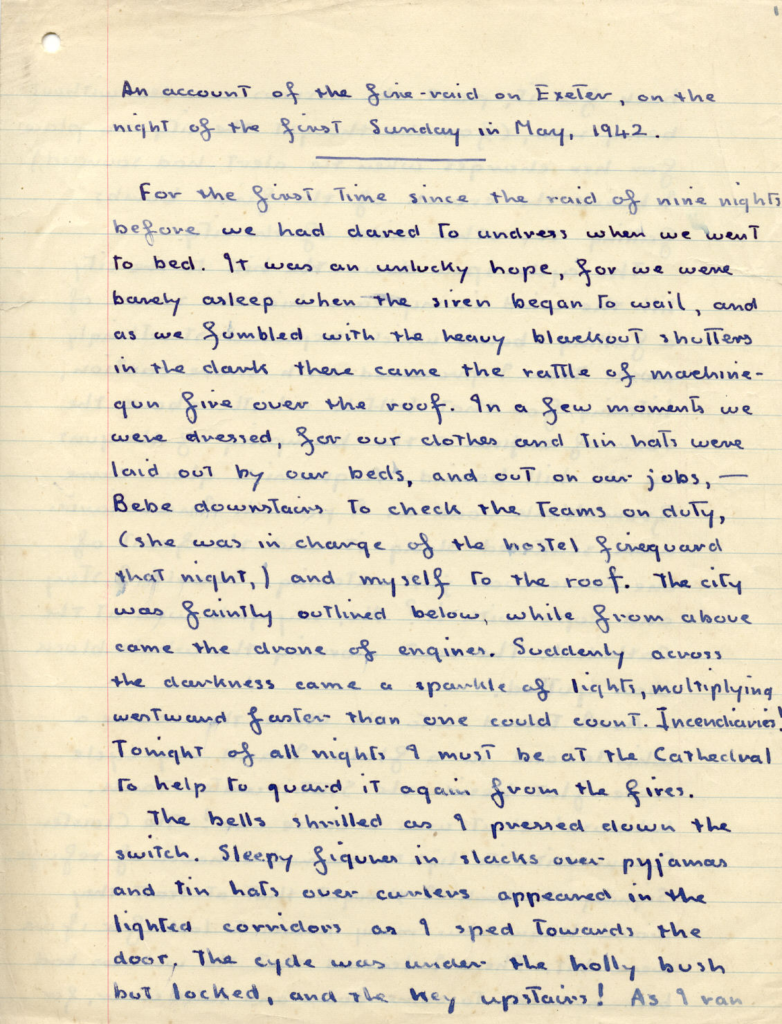 In May 1942, Eunice Overend was a biology student at the University College of the South West (she later became a biology teacher and naturalist, specialising in badger behaviour). She was also a wartime firewatcher. In the early hours of 4 May 1942 a German air raid damaged the Cathedral, and destroyed Bedford Circus, South Street and much of the High Street. In this 12-page handwritten account she recalls in detail the sights, sounds, smells and emotions she experienced that night.

She describes the moment when, shortly after she had cycled down to the Cathedral, a high explosive hit St James’ chapel and part of the south quire aisle. Unhurt, amid falling debris, rubble and burning buildings she and her friends – Bebe, Zena, Peter and Fred – joined the efforts at the Deanery and elsewhere to keep fire hoses supplied with water.

Returning to the Cathedral after the all-clear had sounded, Eunice viewed the burning city through the shattered windows of the clerestory and the gaping hole in the south wall of the aisle. Crossing to the Deanery in search of a telephone, the firewatchers found that the roof of Kalendarhay had been ignited by the blazing paper factory opposite. They helped the pumping teams at the Deanery, then rushed to assist other volunteers trying to save the remains of the Choristers’ School. Eunice, Peter and Fred watched as Bedford Circus succumbed to fires spreading from the High Street. Unable to reach the blaze because the hoses were too short, Eunice, Bebe and Zena returned to the Deanery, where they helped to extinguish the roof fire, then returned to halls at dawn.

In brief moments of rest, a blackbird could be heard singing, apparently mistaking the flames for the light of dawn, and later that day Eunice noted how souvenir hunters had already started to take away pieces of stained glass scattered all over the Cathedral Green.

PrevPreviousCathedral News – May 2022
NextHow does it feel to be a Substitute?Next
© 2022 Exeter Cathedral. All Rights Reserved.
Safeguarding