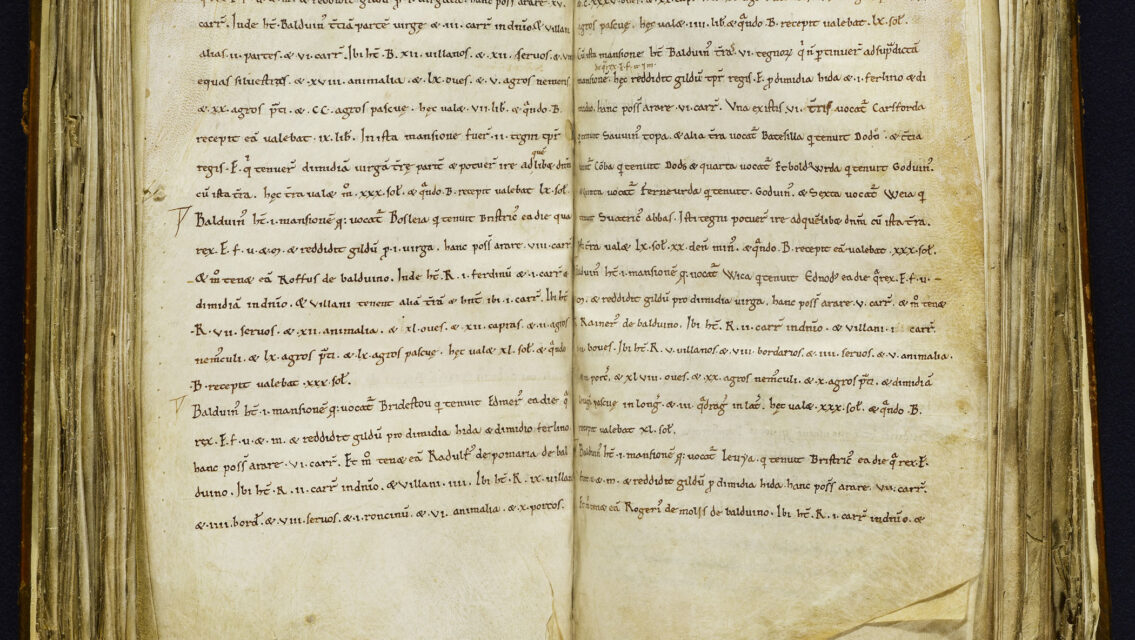 Exeter Cathedral’s 935-year-old Exon Domesday manuscript has unlocked significant new developments in historians’ understanding of the Domesday Book – the record of conquered England compiled on the orders of William the Conqueror in 1086.

The survey’s first draft, which covered England south of the River Tees, is thought to have been compiled with astonishing speed – within 100 days. It was then checked and re-organised in three further stages, resulting in the production of new documents, each designed for specific fiscal and political purposes. The iconic Domesday Book was simply one of several outputs from this process.

Exeter Cathedral Library’s Exon Domesday is the earliest surviving Domesday manuscript. It covers Wiltshire, Dorset, Somerset, Devon and Cornwall, and contains distinct texts written by several scribes in the summer of 1086. The manuscript has provided critical clues to the process and functions of the wider Domesday survey, as Professor Baxter explains:

“This new research, based on the earliest surviving Domesday manuscript, shows the survey was compiled remarkably quickly and then used like a modern database, where data is entered in one format and can be extracted in other formats for specific purposes.”

“It was arguably the first systematic use of big data in British history.”

The study also finds that the Exon Domesday’s scribes were trained either in Normandy or elsewhere in north-west Europe. As Professor Baxter concludes, ‘The Domesday survey was a distinctively English yet fundamentally European phenomenon.’

For Exeter Cathedral’s Canon Librarian Emeritus, Ann Barwood, the manuscript, consisting of 532 parchment leaves, has long been one of the Cathedral’s most important treasures.

“The Exon Domesday has been kept safe here at Exeter Cathedral since at least the 14th century, and is always one of our star attractions whenever it is on public display – normally attracting hundreds of visitors every year.”

“It’s just wonderful that, in a year when public access has been limited due to Covid precautions, the Exon Domesday continues to attract attention around the world, thanks to this new study from University of Oxford and King’s College London.”

The study, ‘How and Why was Domesday Made?’, is published by the English Historical Review, Volume 135, Issue 576 and freely accessible online.

Exon Domesday contains unique information about politics, society, and the landscape of South-West Britain a thousand years ago. It is important simply as the first record of thousands of settlements. As the only surviving source for Great Domesday Book...