Book Review: War: How conflict shaped us by Margaret MacMillan 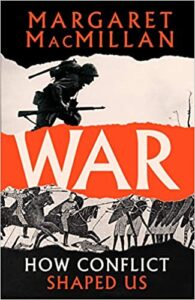 To make sense of our past we need to study war. So argues Margaret MacMillan in this book based on her 2018 Reith Lectures. Some are repelled while others are fascinated by war. Despite the so called ‘long peace’ since 1945, there have been countless wars between and within states that continue to shape our economics, science, medicine, culture, the role of women and general view of the world.

Many of us have family members who either took part in or experienced war, there are museums dedicated to telling the stories and we pause to remember the causalities of war each November. MacMillan had two grandfathers who were First World War doctors and her father and uncles all served in the Second World War. The study is thematic looking at a particular topic in each chapter. If there is a thread that runs through the book it is the role of and impact on women that are examined in different contexts. Perhaps the most surprising is women as warriors. Although rare there are several examples given across time and cultures including Russian fighter pilots in the Second World War.

The nature of war has evolved over the centuries and continues to change; we have a much greater capacity to destroy. War is organised violence and has stimulated further organisation of society, such as nation states. The difference between fighters and civilians has blurred in recent times as non-state actors have taken on powerful armies. Equally fighters in the front line rely on the countless efforts of civilians to equip them to do their job.

Knowing that war is so terrible it might be suggested that the human race could learn to resolve disputes by other means. In a chapter on the reasons for war there are many examples given of the variety of causes from territorial to ideological. Civil war is perhaps hardest to understand until you hear about the ethnic tensions or historical grievances that just need a spark to set alight armed violence.

Humanity has attempted to control what is largely uncontrollable through the creations of international law along with humanitarian organisations that seek to help those caught up in war. Despite such efforts the brutality of war creates the conditions where violence can be indiscriminate. In contrast there is an illuminating final chapter on how art has both been used and influenced by conflict. There are a number of colour pictures depicting various artistic interpretations of war.

This is wide ranging study that takes a western perspective and concentrated most of the examples post eighteen century. I found it a puzzling read – within each chapter the multiple examples are woven together from many threads, sometimes over a wide time span. There are some great insights such as the fact that war inverts the natural order and morality – so it becomes right to blow up buildings, bridges, infrastructure and people. Fields in France after the First World War did not produce new life but death and harvests of ordinance.

In concluding MacMillan is perhaps at her most insightful. Factors that produce war – greed, fear, ideology remain with us and the impact of climate change will create new forms of dispute. She identifies the trend of two levels in war. One using professional military forces using high technology and the power of advanced economies. The other level is the loosely organised forces, largely non-state actors, using low-cost weapons. These levels overlap and it is not always the strongest forces that win the day. Terrorists recruited over the internet who use knives or their car as a weapon are hard to defend against in any conventional military way.

The argument is that we need to pay attention to war because it is still a reality of our world. With the growing use of artificial intelligence, automated weapons and cyberwar we face the prospect of even greater destruction. “It is”, as MacMillan writes in her final paragraph, “not the time to avert our eyes from something we may find abhorrent. We must, more than ever, think about war.” We need to think about its causes, impact, how to end war and how to avoid it in the first place. This book certainly helps us do just that.

PrevPreviousLiving Through Lent
NextConversations in Chemistry by Jane Marcet (1805)Next
© 2022 Exeter Cathedral. All Rights Reserved.
Safeguarding