Book Review: A Duty of Care – Britain Before and After Covid by Peter Hennessy

Book Review: A Duty of Care – Britain Before and After Covid by Peter Hennessy. 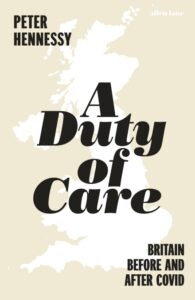 Six days prior to Britain’s first lockdown in 2020, Peter Hennessy started his Covid Britain diary. As one of our foremost modern historians his view is that we would look back and assess the post-world war history as BC (Before Covid) or AC (After Covid). The title of the book might be optimistic that we are AC, as most experts tell us we will have to live with variations of the virus for years. Nonetheless this book sets out to examine how since 1945 the state has provided care in its many forms to the population and how Covid has impacted on the future role of the state.

The Beveridge classic 1942 report identified the ‘five giants’ society had to slay – want, disease, ignorance, squalor and idleness. That report and the subsequent election of a Labour government led to a range of legislation establishing the NHS, welfare payments, education, housing, legal aid, and national parks. The aim was to create a ‘happier, healthier, better educated, more productive workforce with a higher level of social harmony.’ This was the mixed economy/welfare state model built on Keynesian economics of state spending which meant that public spending rose to meet the rising tide of need.

One of the strengths of the book is the detailed political and economic history that underpins the story about welfare, education, and healthcare and how compromises were made over time. The relative economic decline, especially in the 1970s, created the conditions for a new approach to the ‘duty of care’ especially after the election of Mrs Thatcher as Prime Minister in 1979. A chapter examines the Thatcher reforms of the NHS and the response to riots in Liverpool that highlighted the high levels of unemployment, deprivation, and lack of opportunity.

The marketisation of social provision, particularly in healthcare is one of the legacies of that period which have many downsides as the pandemic illustrated. ‘The Marmot Review 10 years on’ provide evidence of where we were as a country on the five giants just prior to the lockdown. Average wages and benefit levels down in the ten years, time spent in poor health increased, funding per school pupil decreased by 8%, youth services were cut, and youth crime increased. Unemployment had fallen but more in insecure employment and number of households in temporary accommodation had increased by 74%.

Hennessy concludes is BC welfare history by saying that the five giants have taken ‘a serious hammering since 1945 and the conditions of life have improved massively…it is also the case the far too many people are suffering from a variety of deprivations that they need not be as citizens of the sixth largest economy in the world.’

Part one ends with a chapter about the Brexit effect. Hennessey argues that there are six major simultaneous unresolved questions that the 2016 referendum threw into stark relief. They range from whether to be part of the European Union, Britain’s place in the world question, social conditions of Britain, the union of Britain and the ability of our institutions to handle all the questions. In repeated efforts to answer what our role in the world might be the government has conducted eleven integrated defence reviews since 1957 and there have been no government reviews of welfare or the ‘duty of care’.

Part two of the book reflects on the arrival of Covid and what lessons we can draw from the experience. His argument is that we need a new form of Beveridge consensus with politicians seizing the initiative to create a vision for 2045. There was a moment when he thought that was possible but political divisions have returned to the fore. Rather than the five giants of war time Britain, Hennessey suggest that there are now five ‘shared tasks’: social care, social housing, technical education, preparing society and the economy for artificial intelligence and combating and mitigating climate change. Interestingly healthcare and pandemic preparation is not on his list. It is also disappointing that he does not pick up on the six unresolved questions raised in the Brexit chapter. Perhaps they are for another book.

The final chapter ‘The Road to 2045’ is a bit of a mix of ideas, worries (Scottish Independence) and calls for action. The Public Inquiry into the government’s response to the pandemic is an opportunity to learn lessons. The NHS and social care have been hit hard and will take time and effort to recover as a key element in the duty of care that we have come to expect from the state to help us all ‘live lives of decency and dignity’.

This book is a very thoughtful and wide ranging assessment of where the ‘duty of care’ originated in Britain and the many challenges we face in trying to forge a new AC consensus of the role of the state in providing care for its citizens.

PrevPreviousThe Beginning of Our Rescue and Why Pink?
NextSupport for UkraineNext
© 2022 Exeter Cathedral. All Rights Reserved.
Safeguarding