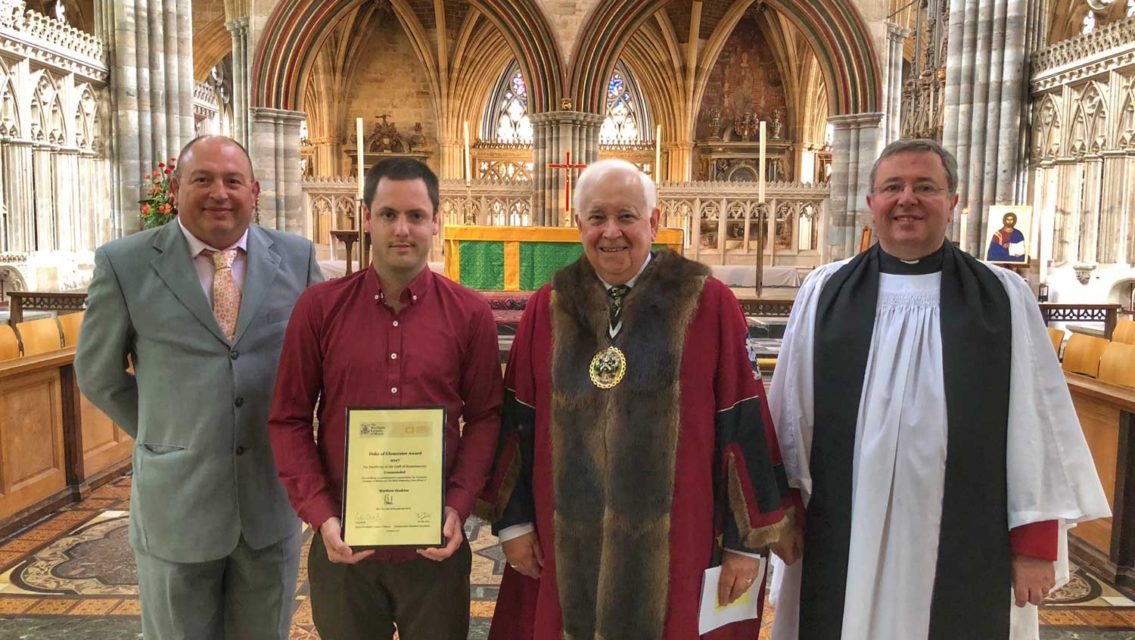 A stonemason from Exeter Cathedral has been recognised by a historic livery company as part of the biennial Duke of Gloucester Awards from the Worshipful Company of Masons.

Matt Hoskins, one of a team of four masons working full-time on the city’s iconic Cathedral, was given a commendation for his submitted portfolio of work which has included high-profile projects around the Cathedral’s east gable. It was presented at Choral Evensong in Exeter Cathedral on Monday 21st May 2018.

Chris Sampson, Clerk of Works and himself a Master Mason, added his congratulations:

“Matt has been with us since November 2013 and was also part of the team that was awarded a special commendation in the same awards programme in 2015.

“I am delighted that he has once again been recognised by our industry as he continues to develop his craft here at the Cathedral.”

The biennial award is jointly supported by the Worshipful Company of Masons and the Stone Federation of Great Britain, and is awarded to qualified masons with the aim of encouraging high standards in all aspects of the craft of stonemasonry.

Exeter Cathedral’s team of masons is currently working through a ten-year programme of major works to continue the conservation and restoration of the building, some of which dates back to the 11th century. They are generously supported by the Friends of Exeter Cathedral and the Worshipful Company of Masons.

How you can help

How you can help

We are passionate about conserving, preserving and sharing the rich heritage of Exeter Cathedral. We are also committed to continuing the tradition of the highest quality choral music that is at the heart of Cathedral worship. But we cannot do any of t...