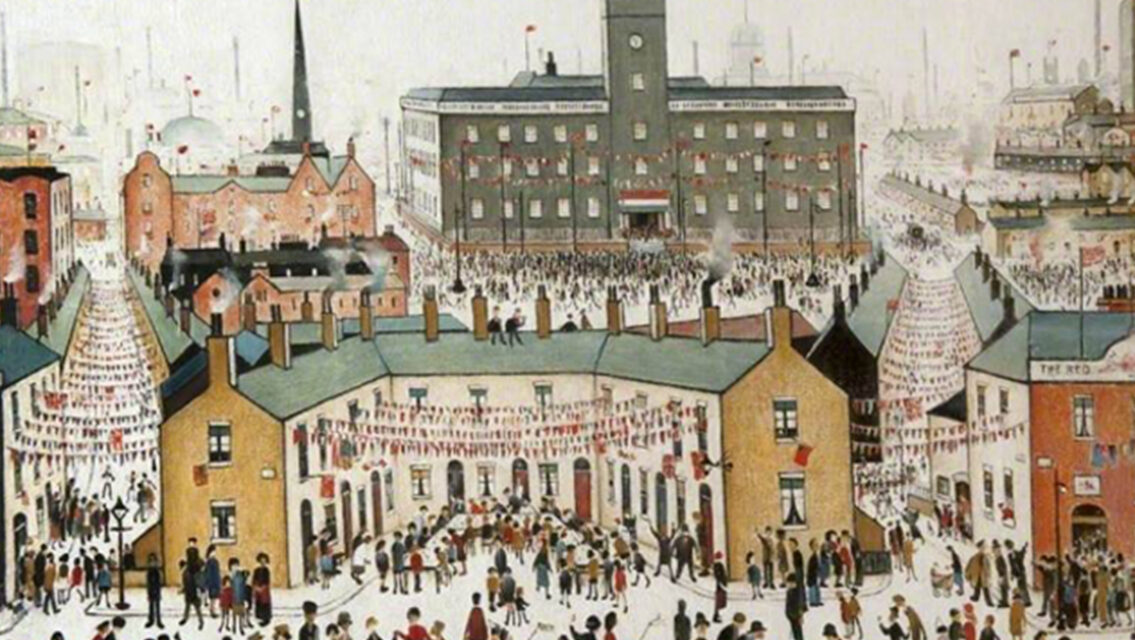 I was challenged to write an Art focus on VE Day this week, for this VE Day Anniversary issue of Cathedral Life. Well, it was not easy, because in 1945 many of the recorded celebratory events were either still photographs or newsreel footage. When thinking about wartime artists my thoughts immediately turned to Paul Nash, who very poignantly recorded both First and Second World War scenes as an official war artist. But there were few artists painting the celebrations at the end of the war! Then I remembered my visit to Glasgow in about 2013, to the Kelvingrove Gallery, and L S Lowry paintings. As with all of his works, they are rooted in Lowry’s patch, his beat as a rent collector; and just a bus ride from his home were the streets of Salford, Hume and Ancoats which so often feature in his paintings. So Lowry’s work was rooted in place: a teeming world of social observation and public spaces, ordinary lives lived in the industrial North.

In this painting we see Lowry’s characteristic ‘match-stick people’ thronging the bunting festooned streets of the town to celebrate the end of the Second World War in Europe. All the industrial buildings are themselves brightened up with flags and bunting and he manages to convey the lively atmosphere of the occasion by including so many ant-like people, obviously enjoying that sense of relief that the long and destructive war was now over.

This townscape shows factories and mills with many chimneys fading into the hazy distance, a few back-to-back houses, a soot-black church spire. Like many of his paintings there’s no sunlight, no shadows. The further we look into the distance, the more bleached and indistinct the endless buildings become, disappearing in the thickening air; although the sky turns darker towards the upper edge like one of those sepia photographs of a century or more ago. But there in the foreground is a sense of that joyful human interaction, familiar, timeless and universal.