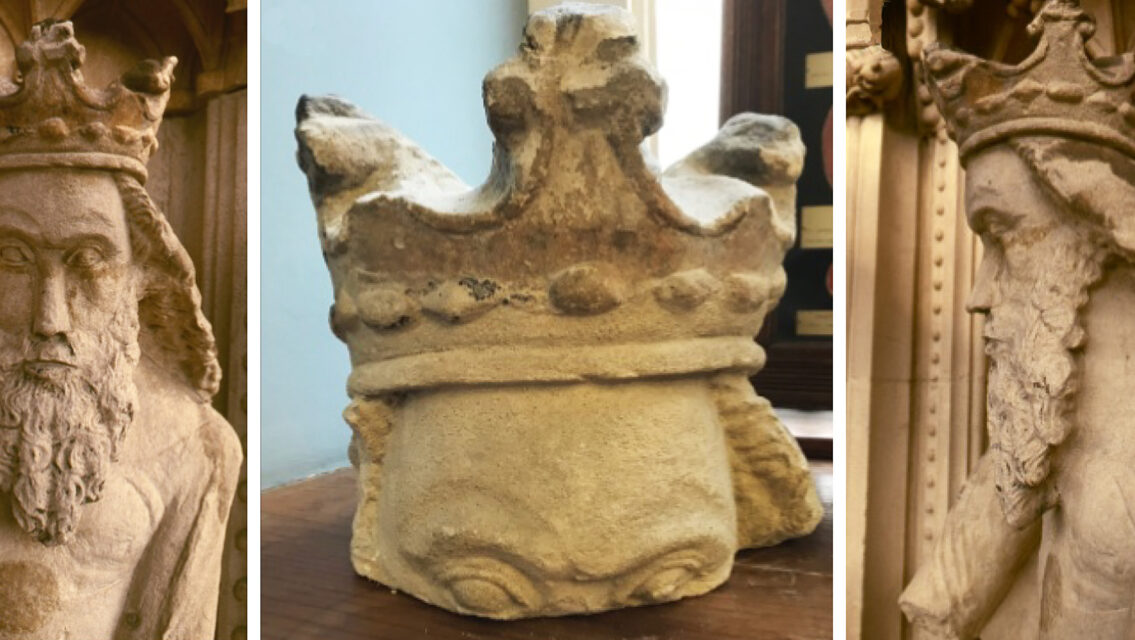 A crown belonging to a 14th century sculpture of a king, is finally to be restored to its rightful owner on the West Front of Exeter Cathedral, 25 years after it was found in a builder’s skip in the North Devon town of Great Torrington.

The sculpture, which is one of a group of kings thought to have been installed between 1342–1348, lost its crown in 1993. The crown was presumed stolen by a member of the public climbing on Cathedral’s West Front, so with no apparent hope of recovering the piece, a replacement crown was painstakingly carved and installed on the king’s head the following year.

However, in 1995 the original crown was spotted in a builders skip, 35 miles from the Cathedral, by a local resident. Thinking that it might be of some interest, he took it to Exeter Museum, where Cathedral Archeologist John Allan immediately recognised the piece.

Now, some 27 years after its adventure began, the approval of essential restoration to Exeter Cathedral’s west front means that the crown can now finally be restored to its king.

For Mr Allan, the story of how the crown found its way back to the king is remarkable, and also extremely important for the Cathedral. He explains,

“With a dramatic asymmetrical pose, convoluted tubular-folded draperies and flowing locks, this king is a particularly splendid example of the rich and mannered style of sculpture characteristic of the mid-14th century works on the front. Exeter’s sculptures in this style are of national importance as examples of a particularly dramatic moment in the history of English medieval figure sculpture.”

Exeter Cathedral is currently closed due to Covid-19 lockdown restrictions, but plans to welcome visitors and worshippers back from July 4, subject to government and Church of England guidance.