Mounted in a glass case high up on the wall in the south west corner of Exeter Cathedral, where it is often overlooked by visitors, is a very well-travelled flag. This flag, which bears the motto ‘Ready, aye ready’ beneath a stag’s head, had been used by Scott and his team during the British National Antarctic ‘Discovery’ Expedition of 1901–04. Sledging flags such as this one tended to be brought out for celebrations such as the landing at the South Pole or at Christmas. Indeed, this flag can be seen flying over the expedition party at photographs taken of their Christmas day celebrations in 1902. 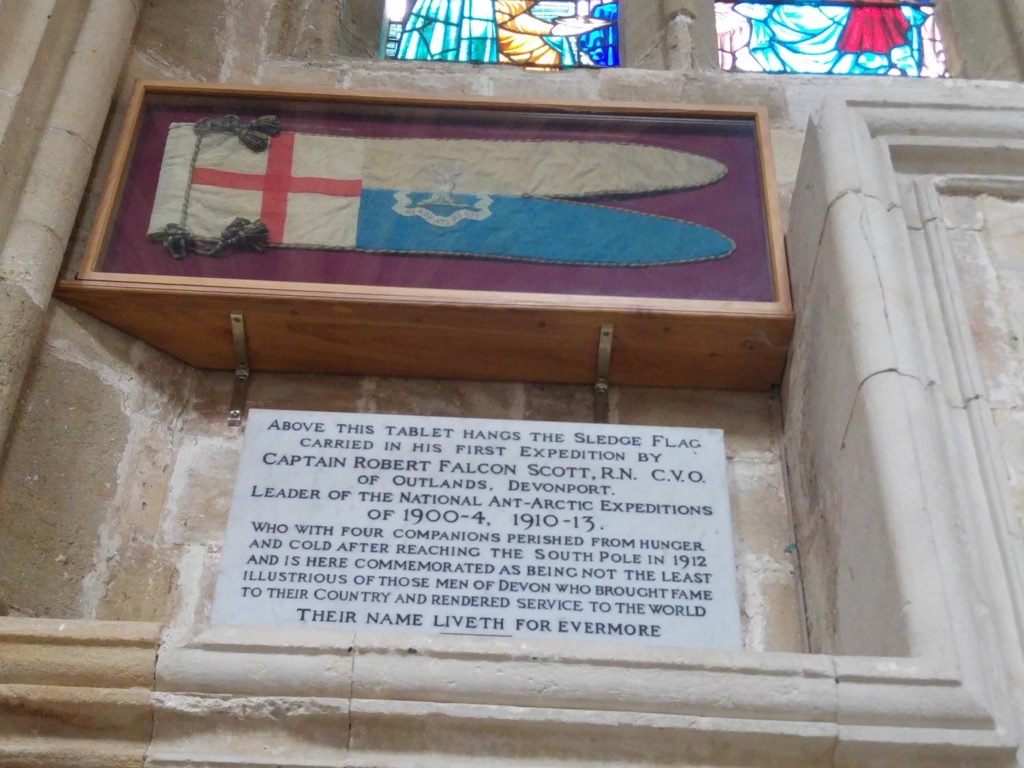 It has been in the cathedral since Scott’s family gave it to the cathedral in the 1920s. At a meeting of the Dean & Chapter on Saturday 24th July 1920, it is recorded that “They accepted with gratitude an offer by Miss Scott through the Dean to present to the Cathedral the Sledging Flag used by her brother the late Captain W. [sic] F. Scott during his expedition to the South Pole”. At first hanging freely, it was after a period of time mounted in the present glass case in order to protect it.

There is a tablet on the wall which reads:

“Above this tablet hangs the sledge flag carried in his first expedition by Captain Robert Falcon Scott, RN, CVO, of Outlands, Devonport, leader of the National Ant-Arctic Expeditions of 1900-4, 1910-13, who with four companions perished from hunger and cold after reaching the South Pole in 1912 and is here commemorated as being not the least illustrious of those men of Devon who brought fame to their country and rendered service to the world. Their name liveth for evermore.”