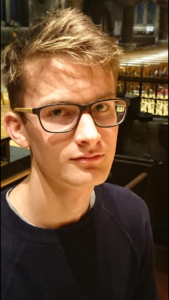 Inspired at the age of eight on hearing an organ, Jed began lessons with Henry Fairs at the Birmingham Conservatoire Junior Department.

Between 2011 – 2015 Jed consecutively won the ‘Under 17 Repertoire’ in the Bristol Eisteddfod Organ Class gaining either a Distinction or Outstanding appraisal.

He has performed in concerts at St. Chad’s Birmingham, Walsall Town Hall, The Methodist Central Hall Westminster, St. Sulpice Paris and has given a lunchtime recital at Christ Church Bristol City.

Jed also played the Double Bass and attended the Junior Royal Academy of Music London from 2011 where he had lessons with English National Opera principal bass Hugh Sparrow, and then for three years he was a member of the National Youth Orchestra of Great Britain, playing in concerts at major venues including The Royal Albert Hall, The Barbican, The Royal Festival Hall and also Birmingham Symphony Hall, after which the orchestra made a compact disc recording of Holst’s ‘The Planets’ for Chandos Records Jed has an interest in conducting and was fortunate to have lessons with Rebecca Millar at the Junior Royal Academy of Music, furthering his experience by conducting his local
church choir and also a small choir in Bristol.

Since September 2017 he has been studying organ with Martin Schmeding at The University of Music and Theatre “Felix Mendelssohn Bartholdy” in Leipzig Germany and has had the opportunity to play in a number of public recitals at both the Nikolaikirche and Thomaskirche.

This September Jed will take up a place at the Royal Birmingham Conservatoire of Music to study with Henry Fairs.