Choral Evensong will include the installation of the Revd Dr Chris Palmer as Canon Chancellor, and Mr Conrad Donaldson as a Lay Canon,

Chris joins us from Merton Priory Parish in South Wimbledon, and will have responsibility for overseeing the pastoral care of the congregation and for reaching out, particularly to the diocese.

All are welcome to attend this act of worship. 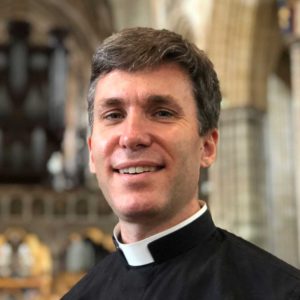 Chris was born in London and brought up in London and the Midlands. He was nurtured in Christian faith from early childhood and was a chorister from the age of nine. He has an important experience of Christian commitment close to his thirteenth birthday – which remains important to him as an important step on the journey of faith. He met his wife, Olivia, whilst they were still at school in Nottingham.

After school, Chris read Theology in Oxford, and continued as a graduate student, eventually completing a doctorate on Paul’s Understanding of Church Unity. He trained for ordination at St Stephen’s House in Oxford, and was then curate for four years of All Saints, Warwick. During these years as a graduate student and curate, Chris and Olivia’s four children were born. He was organist for three years of St Michael and All Angels, New Marston, Oxford – and continued to play the organ regularly whilst at theological college.

Towards the end of his time as a curate, Chris made his first individually guided retreat, in an Ignatian context – and this tradition of prayer has sustained him in his spiritual life every since, including, in 2013, a thirty day retreat, in which he undertook the Full Ignatian Exercises.

Chris was Team Vicar of All Saints, East Sheen from 2002 to 2010, and then Team Rector of Merton Priory from 2010 until 2018. During these periods he was also Area Dean of Ricmond upon Thames, a Voctions Adviser for Southwark Diocese, Chaplain to the 18F Wimbledon squadron of the Air Training Corps, and Bishop of Southwark’s Adviser for Spiritual Formation.

Since he was young Chris has had a passion for country walking – which he discovered partly on parish holidays – and has enjoyed walking in many parts of the UK. He plays the piano and (very occasionally now) the organ; he reads around areas of spirituality and theology as well as fiction; he cycles wherever he can – and loves getting out into the countryside on his bike. He is relishing the opportunities that moving to Exeter will bring both for ministry and for enjoying and exploring Devon with his family.’

The Dean and Chapter is delighted to announce the appointment, subject to the completion of due legalities, of the Revd Chris Palmer from Merton Priory Parish in South Wimbledon. Chris will have responsibility for overseeing the pastoral care of the c...